Women in the Workforce 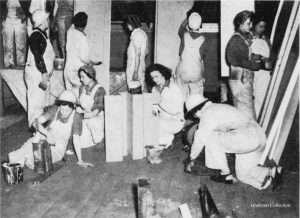 During World War II, there was a shortage of construction and manufacturing workers since most had been drafted or volunteered to serve. Women were hired to fill this labor gap. For example, women construction workers helped build Vanport, which, upon its completion, was expounded as a wartime utopia by the press and fully completed in a year’s time. The first apartment building was ready for occupancy in mid-December 1942, an accomplishment made possible by the reimagining of traditional gender roles. Vanport by design was a suburban prototype, a model for other wartime housing projects. The irony was that the suburbs built post war would idealize women who did not enter the workforce.

Even though the Kaiser Corporation hired its first two women welders in April 1942, it took months before women welders were admitted to the union. At the peak of wartime production in 1943, women made up more than 10 percent of the workforce in most of the shipyards. The strides made by women in male-dominated fields during WWII failed to exert any lasting change in the sexual division of labor. Black women shipyard workers in particular were offered, more dangerous work for less pay, and experienced more overcrowding in their housing situations. 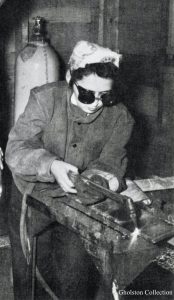 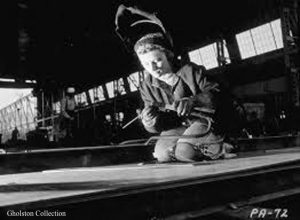 Wendy the Welder, the lesser-known cousin of Rosie the Riveter, represented the hardworking women building ships and other vessels in the Pacific Northwest during WWII.

The livability designers realized that single parents and two-earner families required extensive childcare services in order to give their best energies to production. Vanport nursery schools had the capacity to accommodate 960 children in 1943. Despite the existence of childcare facilities in Vanport and Swan Island the majority of Vanport’s children were watched by friends and family.

In 1943, construction began on five elementary schools and six nursery schools onsite. The Kaiser Corporation built three additional child service centers at various shipyard sites. All children went through consultation interviews for placement. Legally, a child was required to attend school until they completed eighth grade or turned sixteen years of age.  The Housing Authority of Portland negotiated with Portland Public Schools to allow Vanport teenagers to attend Portland high schools. Since high school was not mandated there were no high school classrooms provided at Vanport. Nursery schools lost their federal funding when the war ended. 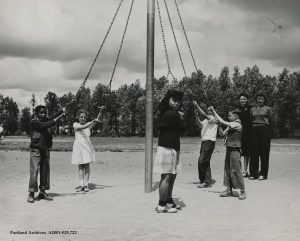 Whatever uneasiness parents felt about child-care centers must have been magnified for [B]lack parents, who encountered racial discrimination in the community and the workplace. Only one center in Portland attracted substantial numbers of [B]lack children—The Blessed Martin Day Nursery. Located in the [B]lack community and run by the Society of St. Vincent De Paul. Blessed Martin was full or above its twenty-eight-child capacity throughout the war. Most child-care centers were run by white staff and inevitably reflected the racism of the community. The Kaiser Child Service centers were no exception. Of 450 parents whose children were enrolled at the two centers in 1943, only three were [B]lack, and the numbers [of Black families] never increased much.

This song, written by Redd Evens and John Jacob Loeb, became a big hit in 1943. It jump-started a campaign to recruit female workers for defense industries during WWII, and soon the iconic Rosie showed up on posters, in movies, and even a Saturday Evening Post cover. Her “We Can Do It” poster has remained popular for many causes. Between 1940 and 1945, the female percentage of the American workforce increased from 27 percent to nearly 37 percent, and by 1945 nearly one out of every four married women worked outside the home.

All the day long whether rain or shine
She’s a part of the assembly line
She’s making history, working for victory
Rosie the Riveter

Listen to the Song

Times were changing, and this touched off an upward spiral of wartime and post-war divorces. In 1942 there were 321,000 divorces; by 1950,  one million veterans had been divorced. This signified the first generation where divorce, not death, was the most likely outcome of the first marriage.

The reality was, most women in defense housing had not been housewives prior to shipyard employment, and they could not afford to retire post war. Many mothers were the sole support of the family. After the war ended, single mothers and Black families faced a private rental market that was closed to them so they were unable to move out of Vanport. The American Dream was a selective, elusive one, where single women of all races and Black families were left behind. Returning white male veterans were given preferential treatment for any available jobs, training and schooling. Women were fired to make way for male counterparts.

5 In 1942, a song titled “Rosie the Riveter” was written by Redd Evans and John Jacob Loeb and was issued by Paramount Music Corporation of New York.  The song was released in early 1943. https://www.pophistorydig.com/topics/tag/rosie-the-riveter-song/