Henry J. Kaiser developed the Oregon Shipbuilding Company in St. Johns in 1941, before the United States officially entered the war, then opened the Swan Island Shipyard (also in north Portland) and the Vancouver Shipyard (in Vancouver, Washington) in 1942. At their peak, these Northwest shipyards employed 97,000 people.

The Kaiser Company recruited workers from all over the United States and its territories, as well as Canada and Mexico. This high influx of workers into the Portland and Vancouver areas created a huge demand for housing, without which workers were reduced to sleeping in storefronts, on park benches, in their cars, or pitching tents in parks or near riverbeds.

The newly created Portland Housing Authority was slow to act, so Henry Kaiser got funds from the Federal Maritime Commission to secure, 650 floodplain acres, just north of the city limits between the Columbia Slough and the river’s main channel, as the site for a wartime housing project for federal defense workers. Kaiser’s elder son, Edgar F. Kaiser and his team oversaw the construction of what became the largest wartime housing project in the United States.

Vanport was almost equidistant from all three shipyards, and its very name is a portmanteau of Vancouver and Portland. Ground was broken for the housing project on August 20, 1942. The project was completed a year later, almost to the day. Residents started moving into Vanport in December 1942.

The Many Names of Vanport

During construction, “Denver Avenue Project” appeared on drawings, blueprints and early photographs. The name referenced its proximity to Denver Avenue — the main entrance to the project.

In order to live in a wartime housing project, at least one household member had to work in a defense industry. In this project, most worked in one of the three Kaiser shipyards, so as the project progressed, it was dubbed “Kaiserville.” According to a state naming guideline, the area could not be named after a living person, so a new name emerged to replace “Kaiserville.”

Henry J. Kaiser sidestepped the too-slow-to-act Housing Authority of Portland (HAP) by securing federal funds to purchase 650-acres of land outside Portland’s city limits, and developed a housing project to alleviate the housing shortage caused by the mass influx of workers who came to work in the shipyards and other defense industries. The Kaiser shipbuilding company recruited workers from all over the United States, Canada and Mexico. Thousands of workers needed a place to live. Kaiser Company needed their workers to have stable housing instead of sleeping in storefronts, on park benches, in their cars, or pitching tents in parks or near riverbeds. According to a state naming guideline, the area could not be named after a living person, so a new name emerged to replace “Kaiserville.”

As “Kaiserville” was almost equidistant from the three shipyards, so this temporary, war-time housing project was officially named “VanPort”—a portmanteau of “Vancouver” and “Portland”.

Vanport’s population grew rapidly as workers – who weren’t eligible for the draft sought opportunities to serve on the home front and earn a fair wage. Underemployed Black, Native Americans, women, the young and old—flocked to Portland from across the country to work in the shipyards.

Vanport’s population grew rapidly as workers – who weren’t eligible for the draft sought opportunities to serve on the home front and earn a fair wage. Underemployed Black, Native Americans, women, the young and old—flocked to Portland from across the country to work in the shipyards.

During its peak in 1943, the population grew to approximately 40,000 residents, making Vanport the second — largest city in Oregon. However, Vanport was never actually an incorporated city — it was a housing project that was given over to the Housing Authority of Portland (HAP) to manage. This meant residents could not elect a city government or enact and enforce city laws. As the manager of Vanport, HAP became the de facto government overseeing the daily operations. Police, library, and fire service were contracted with Multnomah County and operated out of dedicated onsite facilities.

Despite not being an incorporated city, Vanport functioned as a self-contained community with nursery and elementary schools, a post office, a hospital, shopping centers, recreation centers, an athletic field, a movie theater, a fire station, and a library.

A lot of thought and effort went into the landscaping to make the area look less like a swamp. Plants, flowers and trees were planted around Vanport. Tons of sand were brought in to give the Force Lake area a beach like atmosphere.

THEATER: The Vanport City Theater, Cottonwood near Lake Street is open seven days a week from 1:30 p.m. to midnight. Your community theater is one of the few leisure time facilities in the community. It is for your pleasure and convenience. Your suggestions to the Management will be appreciated, and your cooperation in making it a good place to go is solicited.”

The theater seated 750 patrons and was equipped with the most modern amenities of its time. An Oregonian article dated August 11, 1943 praised the new theater and predicted its future success: “Destined to be a center of community activity in the vast housing center, the Vanport theater is a modern motion picture house in all respects. Latest equipment in projection, sound and appointments have been incorporated in its construction.” 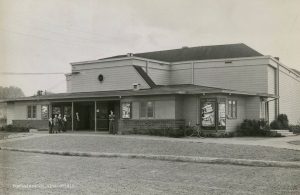 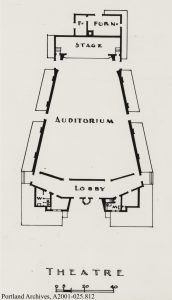 The Wake of Vanport Video

Women in the Workforce →