Heavy rainstorms and rapid snowpack melt in mid-May of 1948 caused the Columbia River to reach extremely high water levels. Widespread flooding began in riverfront cities upstream in Washington and British Columbia. By the end of May, the threat had arrived in Oregon as well.

No Time to Escape

On May 30th, the Columbia River waters neared their crest, towering 15 feet above Vanport on the other side of the levee. Residents received a notice from the Housing Authority of Portland assuring them that they were safe for the time being, and providing brief evacuation instructions in the event it became necessary to leave. At 4:05pm on May 30th, 1948, a section of the railroad berm on the west side of Vanport collapsed, causing Columbia River waters to rush into Vanport. The berm was engineered to support railroad tracks and railroad traffic, not to hold back large amounts of water as the rest of the levees were.

DIKES ARE SAFE AT PRESENT.

YOU WILL BE WARNED IF NECESSARY.

YOU WILL HAVE TIME TO LEAVE.

As the railroad berm fell apart, water poured swiftly into Vanport.   Their only path for people to escape the rising, turbulent waters was to make their way to higher ground on Denver Avenue, which was the main thoroughfare in and out of Vanport. The force of the flood waters dislodged buildings. Boilers exploded and debris swirled around those who were being rescued and the rescuers. The Vanport housing project was wiped out in a matter of hours, displacing approximately 18,000 to 18,700 people who lived there at the time. It was a fine day and a holiday weekend. Many people had left their homes to enjoy an outing, which contributed to why relatively few people lost their lives: 15 was the official count.

Where They Went To

Residents of all races displaced by the flood were offered temporary shelter in schools, churches, and private homes. Dormitories on Swan Island, initially built to house bachelors during WWII, were soon bursting with families. Impacted families were offered the surplus war trailers, which were transported to the Guild’s Lake area. White families were offered vacant units in HAP developments as they became available. The trailers were not free–the evacuees had to pay rent.

Impacted families were offered surplus war trailers, which were transported to the Guild’s Lake area, on the other side of the Willamette River. The first trailers brought to Guild’s Lake were suitable for families of four or fewer; the refurbished trailers that arrived in August could accommodate families with six members.

The Federal Works Agency covered the cost of obtaining and transporting used war surplus trailers, and HAP refurbished them. The trailers weren’t free – the evacueees had to pay rent. At first, they were charged $28 per month; then they increased it to $30 per month by the end of July 1948. The former residents and their supporters protested the conditions at Portland City Hall and organized a car caravan to protest at the state capitol in Salem. Larger families, with as many as seven children, could not be accommodated in trailers and were given short-term shelter by HAP in homes pending demolition at Guild’s Lake and by the urban renewal agency in (what is now the) the Rose Quarter, on the east side of the Willamette River, in homes left vacant by eminent domain. The Federal Census of 1950 showed 1,541 Black people living in the Guild’s Lake District census tract. The 1951 HAP Annual Report stated that 344 families were still living in Guild’s Lake federal housing in November 1951. 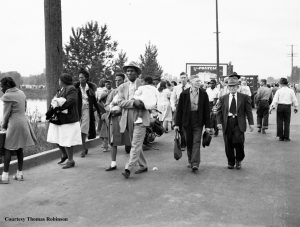 Households headed by Blacks and women faced a tight post-war labor and housing market, as employers replaced Black and women employees with returning veterans.  In 1948 the Supreme Court ruled against enforcement of racially restrictive deed covenants in Shelley v. Kramer.  The restrictions were still enforceable for a year following the court’s decision and remained in practice for decades. Black people who lost housing (along with other minority groups) faced de jure (mandated by law) segregation in hotels, movie theaters, and swimming pools until 1953. That’s when Oregon passed a Public Accommodation Act to ensure that all Oregonians over 18 had “the right to full and equal accommodations…without any distinction, discrimination, ore restriction on account of race, color, religion, sex, sexual orientation, national origin, marital status or age.”

The four main options for displaced Black families were to:

2) Move into trailers at Guild’s Lake, a Housing Authority of Portland (HAP) development in NW Portland

3) Move to McLoughlin Heights in Vancouver, Washington, which had beeb a war-time housing project operated by the Vancouver Housing Authority (VHA)

OPB: Helping Hands from the Past