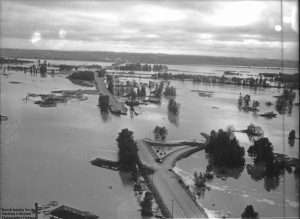 The U.S. Congress passed the Flood Control Act of 1950, which authorized flood control projects, including dams, around the country. The Columbia River Treaty of 1961 was an agreement between Canada and the United States to develop and operate dams in the Columbia River Basin for hydroelectric power and flood control. The flooding of Vanport was a key factor in the decision to form this treaty. Over time, concerns were raised regarding the environmental impact on the riparian ecosystem and salmon runs which led to more eco-friendly provisions in the 21st century.

More than 60 dams have been constructed on the Columbia River watershed, displacing many tribal communities. Although the tribes received financial compensation for their land, the psychological, social and physical consequences of relocation had an immeasurable cost that continues to reverberate today. 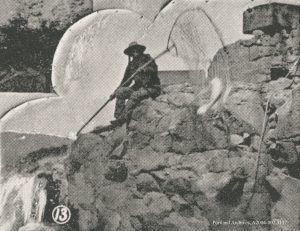 Disrupting a Way of Life

The construction of Columbia River dams destroyed a way of life for Indigenous peoples of the U.S. and Canada, In addition to the loss of sacred burial grounds, food resources like plant-gathering, hunting and fishing sites were destroyed. For indigenous people of the United States and Canada, fishing was not just a leisure activity; it was an economic necessity. American Shad, Steelhead, White Sturgeon, Lampreys, Chinook, Sockeye and Coho Salmon were sustenance and part of a rich cultural heritage for many tribes along the 1,243 miles of the Columbia River.

Continue Learning on other Websites